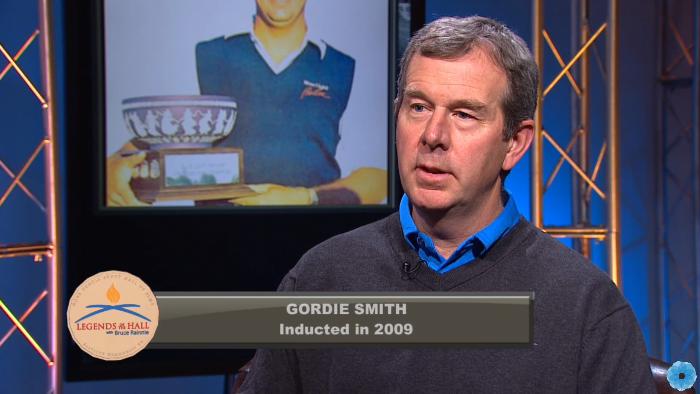 LEGENDS OF THE HALL: Gordie Smith

02:00 – Father got GS and brothers interested in golfing. GS grew up caddying for his father and his father’s friends.

02:33 – Hung around the golf course – back when GS was younger it was more possible to play at night – played Par 27 after golf course closed.

05:30 – Meets John Brophy by firing a ball over his head. Slapshots helped GS train for a hard shot.

08:15 – Teacher Bruce Walker reached out to universities for golfing on his behalf. GS ended up playing golf for the University of South Florida.

09:30 – GS toured schools in Florida with his grandfather. At the University of South Florida, the coach watched him play. GS drove a ball over the lake, and got a scholarship on the spot.

11:00 – GS found it difficult to adapt to playing all year long: in the winter in Florida and summer in Nova Scotia.

11:30 – Placed 7th in the 1988 Canadian Open – Saw himself on the leaderboard near the end of the course and got nervous.

14:00 – Came close to qualifying for the PGA tour but missed by a small margin.

16:00 – GS has no regrets but did wish he had a mentor to pave the way for a Nova Scotian golfer.

18:00 – These days, not making the PGA tour is not as big a deal as there are other high-level tours like the Web Dot Com tour.

19:00 – Throughout his career, GS has had 6 holes-in-one. The first was at age 12, another at the Digby Classic after a few drinks. GS reminisces on the adrenaline rush he gets when it happens.

20:45 – Today, GS is the general manager of the Ashburn Golf Club. Does not teach golf as technology has advanced past his knowledge. Golfs about once or twice a week, but long-distance vision is getting worse with age.

22:00 – Winning a major tournament with his son as caddy was a good feeling.

23:30 – Golf taught respect, communication at all ages. “Golf is a wonderful way of life.”

Description: 25 minutes and 11 seconds of colour digital video footage with audio. Filesize is 1.77 gb. Bruce Rainnie interviews Gordie Smith for the Legends of the Hall series on Eastlink TV.
History of Use: Aired on Eastlink TV Network on February 4, 2018
Educational resources: Gordie Smith