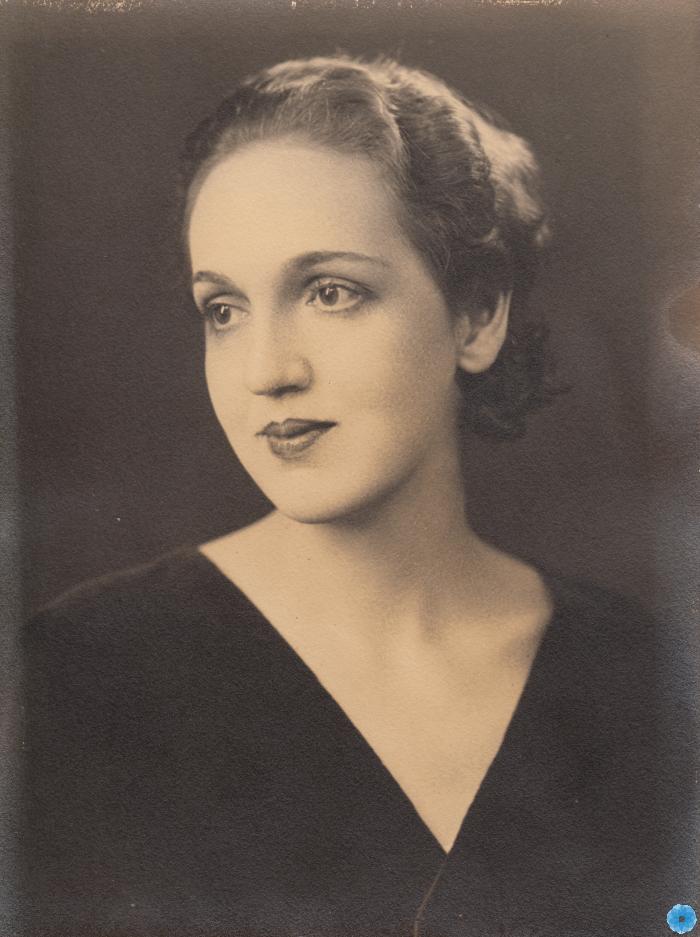 This picture is the more famous depiction of Mona Parsons at age 19.

Mona Parsons was born in Middleton, Nova Scotia in 1901. In 1911 she and her parents (Mary Keith of Salisbury and Colonel Norval Parsons) moved to Wolfville, Nova Scotia. She was enrolled at the Conservatory of Music and Fine Arts at the Acadia Ladies Seminary, graduating in 1920 with a diploma in Oratory and Expression. She then enrolled at the Currie School of Expression in Boston. Upon completing her studies there she enrolled to study voice and music at Central College in Conway, Arkansas until 1925. In 1926 she was a beauty contest representative from Wolfville in the summer carnival held in Kentville, Nova Scotia. She then went to New York to become a showgirl with "The Follies". After the death of her mother (on Mona's 29th birthday in 1930) she enrolled in Jersey City Medical School and graduated in 1935 with high honours. She then began to work at a medical establishment in Park Avenue, New York.

In 1937 she hosted an evening of entertainment for her brother's business associate from Holland, Willem Leonhardt. Willem, an unmarried and wealthy Dutch businessman, and Mona spent time together during his stay and by February they were engaged. They were married in Holland on September first, only six months after they met. Mona and WIllem joined the Dutch underground resistance during the initial occupation of Holland, aiding two downed British Airmen by hiding them in their attic. Mona was arrested by the Gestapo in 1941, and months later sent to Vetcha, a German labour prison for nearly four years. In 1945, her and a 23-year-old baroness she met there escaped the prison and walked 156 km over 3 weeks across Germany to the Dutch border, barefoot nearly the whole time, and pretending to be German refugees. In April 1945 she found refuge with members of the North Nova Scotia Highlanders who were stationed at Vlagtwedde in northeastern Holland. She was quite ill and emaciated, being just 86 lbs, by the time she underwent this journey in the last few months of World War II. She and Willem returned to their home after the war but Willem, who had been in precarious health, died in 1956. Unable to inherit Willem's estate Mona left Holland with a few personal possessions and returned to Canada. She married widower retired  Major General Harry W. Foster in 1959 and they spent some happy years together in Chester but after his death in 1964 Mona returned to Wolfville. She died there in 1976 and is buried there.

This is a formal portrait of a woman showing head and shoulders, and looking toward the right. She is wearing a dark v-necked dress. Her hair is combed back, showing her whole forehead. She is wearing lipstick.

This is Mona Parsons as a young woman,